I've been stitching a little most days and moving right along with the alphabet in the center of the design. 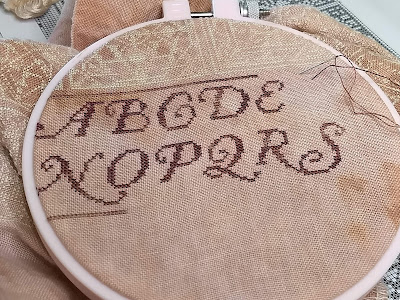 And as of this morning, I'm even farther along than shown above. It's stitching up faster than any of the bordering squares. As satisfying as my progress has been, I've been thinking of starting up this design: 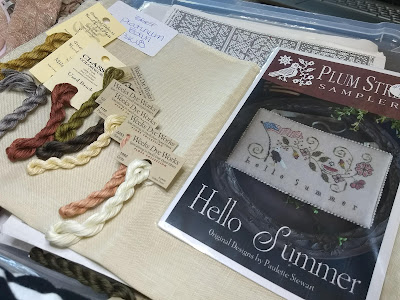 I still haven't finished Hello Fall, but I bought Hello Summer months ago, with the called for flosses, and I did have a finish recently so that leaves a project box available and it must be filled! I found that I still have some 36 ct Platinum to stitch it on so stay tuned for progress on this sweet design.

The heat is on here in the West, but looks like temps in our area will normalize by the end of the week - yay! But even in the heat, there are things to do and people to see. Friday was Gary's birthday and I made him leave the office for a quick jaunt over to Walla Walla for an afternoon of wine, music, and great food. Itinerary: Northstar Winery where Tom Taylor from Boise, was playing, then dinner at Whoopemup Cafe in town. I had the sockeye salmon with creamy grits, summer veggies, and tarragon pesto - SO GOOD!

Then on Saturday morning, I left early to drive to Spokane for my Aunt Cleta's 90th birthday celebration. I picked my sister up at the airport, then we walked the mall awhile to kill some time before the party. Some of our favorite cousins were there, coming from all over Washington, and northern Idaho. What a grand time we all had!

Well, I think that's more than enough chatter from me for one post! I hope you'll come by again to see what I've been up to!
Posted by Von at 3:35 PM

The alphabet looks lovely. I like the color. What a wonderful celebration for your Aunt. The heat is really getting to me. Good for you for still going out!

The alphabet is gorgeous. I really love stitching letters. Great celebration for your Aunt. I just bought some of the platinum linen too...my first time. I think I will like it. RJ@stitchingfriendsforever

You are moving along on the alphabet portion of the Red Velvet piece. Happy belated birthday wishes to your Aunt! It looked like it was a fabulous occasion.

What a fab time you have had! I love catching up with those that I haven't seen in a while. Such a happy photo! Your stitching is firing along. A hot little needle is what you've got!

Von: Happy Birthday to your Aunt.
I love the designs you are working on they are lovely, the fabric you used for the alphabet is beautiful.